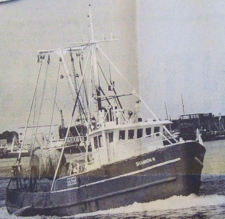 Victor Pereira was sleeping on board the Shannon III on January 31, 1994. The ship was 80 miles southeast of Nantucket. When he woke up, he found the ship was taking on water. He told the captain, Robert DeJesus Jr., and crew member Wayne Costa to abandon ship. The captain radioed a mayday signal. They had all put on their survival suits, and Mr. Pereira had unhooked the lifeboat, when the boat sank. Mr. Pereira managed to swim to the surface and get into the lifeboat. A Coast Guard rescue swimmer saved him, but a search by two cutters, a Falcon jet, and a helicopter failed to locate the other two men.