Jeremiah F. Donovan Jr., 36, of New Bedford, was lost at sea Jan. 9 while serving as a crew member aboard the fishing scalloper Huntress. He was the husband of Doris (Fournier) Donovan. A lifelong resident of New Bedford, he was a communicant of Sacred Heart Church. He served as a crew member aboard numerous vessels for the past 20 years. He was a member of the New Bedford Fishermens Union and Local 59, Teamsters Union.

In addition to his widow, he was survived by a daughter, Nora-Jeanne Donovan, and his mother, Claire (Chainay) LeBeau, both of New Bedford.

Jeremiah Donovan was discovered missing from the scalloper Huntress at 7:45 a.m. on January 9, 1980, about 100 miles southeast of Nantucket. The merchant vessel Cinderella, two Coast Guard planes and a helicopter, as well as a Navy plane, joined the Huntress in searching the area until 3:30 p.m. but were unable to find Mr. Donovan. 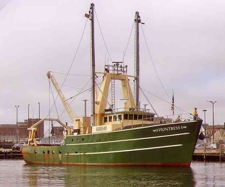