Lawrence "Larry" Kirk, an Owls Head man, was married to Carla Smith, sister of crewman Roger Smith. They lived with their three children in a house on Shell Street in Owls Head village. Their oldest child, John, was 8 years old in 1939. The others were Raymond, 6, and Mary, 3. Carla was pregnant with their fourth child when the Madeline and Flora was lost.

Larry was a big man, gentle and hardworking. He had an aunt, Jenny Kirk, who ran the village store and post office. Young John sometimes helped her out around the store and she'd give him candy or an ice cream.

On November 20, 1939, the scallop dragger Madeline & Flora left Rockland, Maine, for a ten-day trip to Georges Bank. It was a cold, sunny day. They passed another dragger, the Muskegon, near Matinicus Island. When the ship did not return on November 30, the Coast Guard began an exhaustive search by ten vessels, including a Navy destroyer. According to the Daily Kennebec Journal  of December 10, "the searching extending north to Cape Baslo and east and south more than 300 miles was spurred by President Roosevelt's announcement at the White House yesterday that the government would make every effort to find the boat." The search was abandoned on December 18, and no wreckage was ever found. 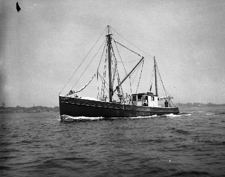