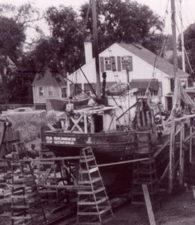 On December 15, 1955, Charles J. Tapper Jr. fell overboard. Captain Arnold Fargh threw a life ring to Mr. Tapper, who caught it. The captain ordered the drags hauled in so that the vessel could make a full turn to try to pick up Mr. Tapper, but by the time they were able to do so, Mr. Tapper had lost his grip on the ring. A crew member, Peter Darwin, went overboard with a line tied to his waist, but Mr. Tapper was dead when he reached him.