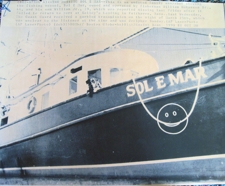 On March 25, 1990, as the Sol E Mar was sinking off Martha's Vineyard, the crew was able to send a four-second distress call to the Coast Guard. Ninety seconds later, the Coast Guard received a hoax call and decided that the first call was not genuine. Only when the boat was reported missing on March 29 did the Coast Guard begin its search. Volunteers searching for the wreck found it a month later.

As a result of the incident, the Studds Act changed the Coast Guard's policy regarding distress calls, imposed a federal criminal penalty for making hoax calls, and upgraded Coast Guard equipment and the National Distress System.