Mr. McCartney was survived by his wife, Lois Saint Clair. They were married on October 7, 1939. 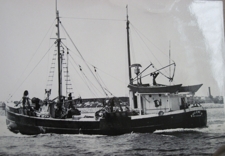