Mr. Coish had lived in New Bedford for twenty-two years. He was a member of St. Martin's Church and of the New Bedford Fishermen's Union. He was survived by his wife, Anna (McLeavy) Coish; three sons, Thomas, John, and Jan; a daughter, Lori Ann; two brothers and two sisters in Newfoundland.

On April 1, 1969, Frank Coish went to Hathaway-Braley Wharf in Fairhaven to snug down the fishing vessel Mino, which was scheduled to sail that day. The captain delayed their departure until April 3 because of bad weather. When he called Mr. Coish's home to tell him of the delay, he learned that he had not returned.Police thought that Mr. Coish might have sailed on another ship, but on April 12, when all the vessels that had sailed that day had returned, a search began. Mr. Coish's body was found on April 27, floating near the wharf where he was last seen. 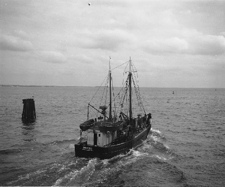