Mr. Kavanaugh came to the United States from Ireland in 1985. He had been fishing out of New Bedford for twelve to eighteen months. His survivors included his sisters, Marian and Vera, and a brother, Liam, from Ireland, and his brother Joseph, from Boston.

Sean Kavanaugh fell overboard from the Warrior in late June 1993, about 55 miles east southeast of Nantucket.The crew threw out life rings, but visibility at the time--4:40 a.m.-- was near zero. The poor visibility hampered the search by Coast Guard cutters and nearby fishing vessels. His body was not recovered. 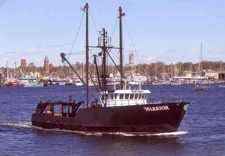