Joseph W. LeBlanc, also known as "Snooky" White, was born in Petit De Gra, Nova Scotia, and had lived in New Bedford for 27 years. He was a World War II Navy veteran. A member of the New Bedford Fishermen's Union, he had been a fisherman most of his life. He was fatally injured aboard the Ellen Marie while a net was being hauled aboard. He had been a member of the crew of the dragger Viking, which sank in October 1966. He was survived by his widow, Lorraine Lariviere LeBlanc; two sons, Gordon Souza of Acushnet and Cpl. Richard Souza of the U.S. Marines; two daughters, Diane and Bonnie May of New Bedford; three brothers, Victor White of Vinal Haven, Maine, and George White and Marc LeBlanc of Rockland, Maine; three sisters, Elizabeth Hoban of Roxbury, Mary Hooper of Rockland, Maine, and Irene Raynes of Owls Head, Maine; and two grandchildren.

Joseph W. LeBlanc, also known as "Snooky" White, died when he became entangled in a line while hauling in a net on the dragger Ellen Marie. 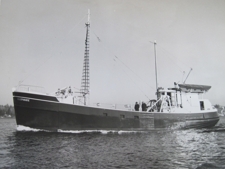