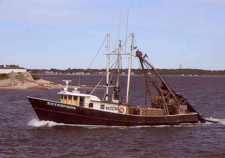 The Enterprise was dragging for sea clams about two miles off the coast of Nantucket when a fire broke out in the engine room around 6:45 p.m. on February 20, 2005. Captain John Verissimo, crew members William Lanzisera, Shannon Pacheco, and Jose Barbosa, and a Labrador retriever boarded a life raft. Mr. Lanzisera had been unable to get into his survival suit. When a Coast Guard helicopter arrived, Petty Officer Paul Taylor was lowered into the ocean and swam to the raft. He rescued Mr. Lanzisera first, placing him in a basket to be hoisted into the helicopter, where crew members began treating him for hypothermia. Mr. Taylor then rescued the other crew members and the dog. Mr. Lanzisera died en route to Cape Cod Hospital in Hyannis, where the other crew members were treated and released.