Captain Douglas O. Greeke was born in 1899. He had been a fisherman for 33 years, sailing from Nova Scotia and Massachusetts ports. He took command of Alert in 1944. At the time of his death, he was living in Medford, Massachusetts. He was survived by his wife, Eva, and three daughters: Lucille, Alice, and Elizabeth. 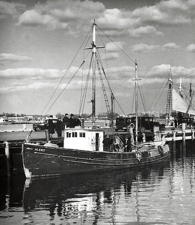