James Pendergast was lost at sea during a storm in early November 1966. The Terra Nova was fishing on Georges Bank when the ship rolled. A wave washed Mr. Pendergast overboard. The crew threw him a life ring, but they could not see him in the dark. 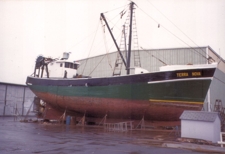