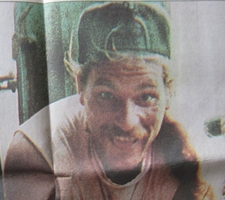 Paul Martin was 35 years old when he died in the sinking of the Cape Fear. His body was found on January 9 off a Dartmouth beach. He was survived by an older brother, Paul, and a sister, Donna Reed.

The Cape Fear was returning to New Bedford on January 8, 1999, with 130 cages of clams. She was operating in 6-10 foot seas, with winds at 25-30 knots, and rain and sleet.  Captain Steven Novak called a nearby vessel, the Misty Dawn, to say they were taking on water and asked them to call the Coast Guard. The Misty Dawn rescued Captain Novak, James Haley Jr., and Joseph Lemieux. Paul Martin and Steven Reeves did not survive. Mr. Martin's body was found off Goosebury Neck in Westport the next day. Mr. Reeves' body was not recovered.