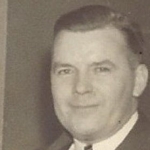 Edwin A. Lemberg was born in Hollywood Beach, Wildwood, New Jersey, and began fishing out of New Jersey and New York as a young man. He came to New Bedford in 1946 with his 65-foot dragger Arthur L., which he sold in April 1954. He bought the Comber in Cape May, New Jersey, soon afterward.

He was survived by three sons, Arthur, Edwin, and Christopher, all of Dartmouth, Massachusetts; three sisters, Doris Isaksen of Dartmouth and Irene Axelsen and Elsie Jensen, both of Cape May; and his mother, Anna Lemberg, of Cape May. His wife, Hazel, had died of cancer less than a year before his death. His brother-in-law, John F. Romanoff, was lost aboard the Doris Gertrude in February 1954.

Captain Edwin A. Lemberg fell overboard just after 4 a.m., when the crew was getting ready to haul back the dragger's nets. They were fishing about 25 miles southeast of Nomans Land. The crew searched the area for three hours but were unable to find the captain.