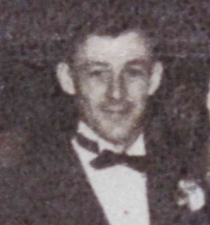 Engineer Doucette was born in Edgartown and came to New Bedford in 1924. He began fishing when he was 16 and served with the Navy Sea Bees during World War II, in Guam. His father, Captain Louis Doucette, was awarded the Carnegie Medal of Heroism in 1910 when, as a crew member of the sloop Priscilla, he rescued seven men from the schooner Mertie B. Crowley, which sank off Wasque Shoals. His brother, Captain Louis Doucette Jr., was also a well-known fishing captain.

As deckhand, engineer, and mate, Mr. Doucette had worked on several New Bedford draggers and scallopers. He was a communicant of Sacred Heart Church and a member of the Amvets. Captain Murphy's wife was his sister.

In addition to his father and brother, he was survived by his wife, Dora (Metevier) Doucette; a son, Herbert Jr., 6; a daughter, Jacqueline, 3; another brother, Master Sergeant Richard Doucette of New York City; five sisters, Evangeline Murphy of Fairhaven, Margaret Harney of New Bedford, Mary Freeman of Groton, Connecticut, Josephine Whitney of Edgartown, and Mrs. Loretta Gilgen of Falmouth; and several nieces and nephews. His wife was expecting a third child at the time of his death.