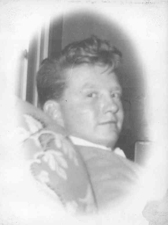 James "Jimmy" Fitts left a pregnant wife, Emily, three children, and a brother, Joseph Tripp. Jimmy and Emily's second daughter was born two months after the sinking. When Emily died in 2001 at the age of 73, the Fitts children had her ashes sprinkled over the Davis South Shoal where her husband had been lost. Emily's sister, Juliette, was married to Joseph. In fact, she introduced Jimmy and Emily at the soda fountain in Browne's Pharmacy. They went next door to the American Legion to dance and were together ever after that.