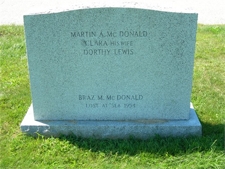 Braz McDonald was considered a "good guy," and crewmen liked to fish with him because he was a "competent and decent captain." John Linehan, general manager of the Seafood Producers' Association at the time, said that the Red Start "was a good boat and kept in good repair" and that Braz was "a wonderful captain."

He was the son of Martin and Clara Julia de Fraga McDonald. Braz left a wife, Rosemarie Alfano, whom he married in 1932, and children.