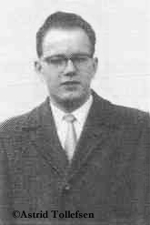 Gordon Kallestein was the nephew of Captain Magne Risdal. His parents, Andreas and Ragnhild Kallestien, lived in Norway.  He had a sister in Staten Island, New York., Mrs. Nora Haaland, and two others in Norway, and three brothers, two in Norway, and Knut Kallestein, in the U.S. Army.