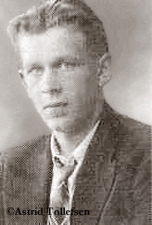 Jens Ferkingstad was 46 years old and a native of Norway.  He was unmarried and was a Norwegian veteran of World War II.  Mr Ferkingstad's brother, Olav, also perished aboard the Midnight Sun.  Their father, Gunvald Ferkingstad, lived in Karmoy. Jens Ferkingstad had a young son who later moved with other family members to Norway.